Revoking An Invalid Patent: The Case of Didanosine in Thailand

In May 2001, a lawsuit was filed by the AIDS Access Foundation, a Thai AIDS foundation, and two people living with HIV/AIDS ( the plaintiffs) against Bristol-Myers Squibb (BMS). The lawsuit challenged the grant of a patent on the antiretroviral drug didanosine (also known as ddI). The court added the Thai Department of Intellectual Property (DIP) as a co-defendant with BMS.

The drug was discovered by the US National Institutes of Health, with the US Government holding the rights to the original ddI invention. At the time ddI was discovered, Thai law did not permit the patenting of pharmaceutical products, so even if the US Government had wanted to obtain a patent in Thailand, it could not have done so. However in September 1992, Thai law was changed so that pharmaceutical products could be patented. BMS licensed the rights to ddI from the US Government. Although BMS could no longer obtain patents for ddI itself, since the structure of ddI was publicly known, they could still apply at any time for patents on ‘derivative’ inventions relating to ddI.

On 7 July 1992, BMS filed a derivative patent application in Thailand intended to protect a specific dosage formulation. In this patent application, the invention was limited to a specified dosage range of 5mg to 100mg per dosage unit.

During the examination of the patent application, the Thai Department of Intellectual Property allowed BMS to remove the limitation in the dosage range. In many patent offices it is allowable to amend a patent application, but only if certain rules are followed. If the amendment was allowed without following these rules, and a patent granted, then the patent may be invalid. On 22 January 1998, the Thai Patent office granted a patent for this unlimited invention.

The effect of this unlimited patent was to prevent the Thai Government Pharmaceutical Organisation (GPO) from manufacturing any sort of ddI tablet. After a campaign to try to persuade the government to issue a compulsory licence, it was decided to manufacture ddI in a powdered form instead. However, the powdered form had an unpleasant taste and side effects, and it was more difficult to take than a tablet. Faced with this block on local production of the tablets they needed, civil society realised they would have to try a different tactic - to challenge the grant of the patent itself. The Plaintiffs demanded that BMS amend their patent claim back to the limited dosage range originally asked for. BMS tried to oppose their application on the ground that they had no right under Thai law to challenge a patent.

In the final verdict read on 1 October 2002, the court clearly confirmed that the two individuals and the AIDS Access Foundation had the right to challenge the BMS patent. The court order for this finding quotes the 2001 Doha Declaration on TRIPS and Public Health, and was among the first judgments to refer to the Doha Declaration directly. This confirms that the TRIPS Agreement (which required Thailand to change its law to allow patents on pharmaceutical products) must be implemented and interpreted in a manner supportive of Thailand’s right to protect public health and, in particular, to promote access to medicines for all. As those living with HIV/AIDS could have been injured by a patent blocking access to an affordable medicine, the judgement says, they had the right to challenge the patent and that “those in need of medicines are interested parties to the granting of a patent”.

The judgement also found that the amendment that BMS made – which was allowed by the Thai DIP – was unlawful. It confirmed that under Thai law, the most important factor in determining the scope of patent protection is the wording of the patent claims. The scope of the allowable patent claims depends on the details of the invention described to the public in the patent document.

One reason that the amendment was unlawful was that the removal of the dosage limitation of 5mg -100mg expanded the scope of protection beyond what was described in the patent document. The judgement ordered BMS and DIP to amend the patent by putting back the limitation. This meant that the non-patented ddI dosage forms could then be produced by generic manufacturers.

This patent challenge and judgement was very important, not just for those fighting for access in Thailand, but also in other developing countries, as it sowed the seed of the idea that it was possible for public interest groups to challenge patents. 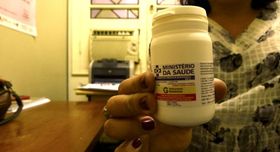